You can run this bash command to find every .bash_profile in /home/ and append the line above. Be careful before running this command. It works on my system, but you can never be too careful with recursive commands such as this.

This should be all you need to do. Now when a user logs in for the first time, the google-authenticator application will automatically run and create a .google\_authenticator file. The user will then be able to add the key into their phone app and have multifactor authentication to log into their account. Their name will get removed from the /google-auth/authusers file, so they will no longer be given access without a multi factor auth, or ssh key.

In this tutorial we will go over how to setup two factor authentication for SSH using google-authenticator on CentOS 6.

First thing we need to do is install the google-authenticator package using yum.

Next, we need to setup pam to use google_authenticator for authenticating users.

Then add the following lines at the bottom.

Next, we need to add the ChallengeResponseAuthentication yes option to the /etc/ssh/sshd\_config file.

Now restart sshd for the new changes to take affect.

The first time I tried to set this up, I was unable to login using my authentication code. I would be prompted for a code when tried to initiate an ssh connection, but I would see this message in the logs and would not be let in.

It turns out the problem was caused by the time on my testing server not being correct. Make sure you have ntp running and configured correctly.

To install and set ntp to auto start:

Now run this command to manually force ntp to sync with pool.ntp.org

You can check the date on your server with the date command to make sure ntp is working. After syncing my time, I was able to log into my ssh server using google authenticator without a problem.

We decided that we wanted to allow users to login using either Google Authenticator, or a regular ssh Pulic Key. We generally use public keys for ssh authentication, but occasionally we will want to login to one of our servers from a machine we will only use once. Google Authenticator is a great compromise for this as it allows us to authenticate without an ssh key, but still maintains our security.

To ensure sshd will allow authentication from either the Google Authenticator module in pam, or an ssh key, uncommend the following lines in /etc/ssh/sshd\_config

The changes we made to /etc/pam.d/sshd should only effect the password authentication portion of the ssh login process. If PubkeyAuthentication yes is set, ssh should approve your ssh key authentication without reaching out to pam and requiring two factor authentication.

In our next article, we will go over how to allow users to login once before google-authentication is enforced.

If you are installing the Jungle Disk agent to a server via command line, you will need to use wget or another cli http client to download the installer. We are installing Jungle Disk to a CentOS 6 server, but there are also packages for Debian based systems, and a tar file with the source if you would like to compile.

Download the installer, and run the rpm to setup and start the backup agent.

This is the rpm package as of the time this article is written, but as there are new releases of the agent software, this will change. Make sure you download the latest version from your Jungle Disk account.

Now you will need to add your license to the new junglediskserver-license.xml file. You can find this license in your licenses section of the control panel. https://secure.jungledisk.com/secure/account/subscriptions.aspx

Enter in your license string in the licenseKey section.

Setting up the Management Client and configuring a backup.

You will need to install the Management Client to a Windows computer. Download the client here: https://secure.jungledisk.com/downloads/business/server/windows/

Once it is downloaded and installed, you will need to log in. Click Next to start the configuration. 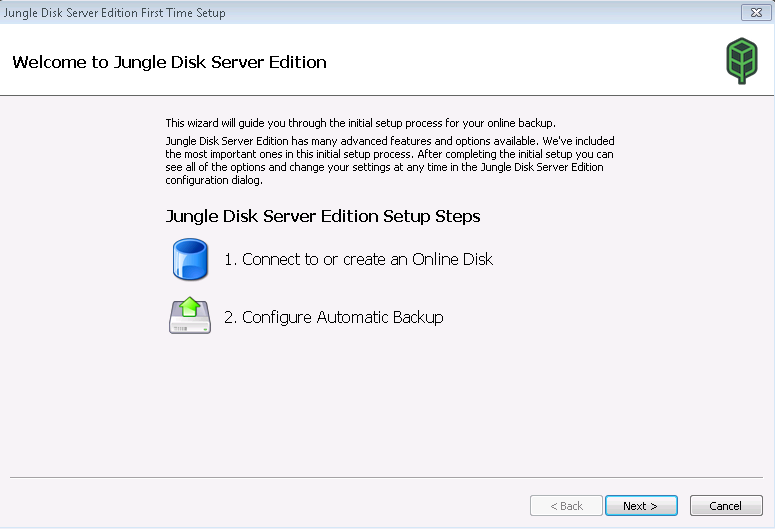 If you already have setup Jungle Disk to backup another server, you will need to chose your new server from the server list. The client will be the hostname on the server. Now, create a new online disk. 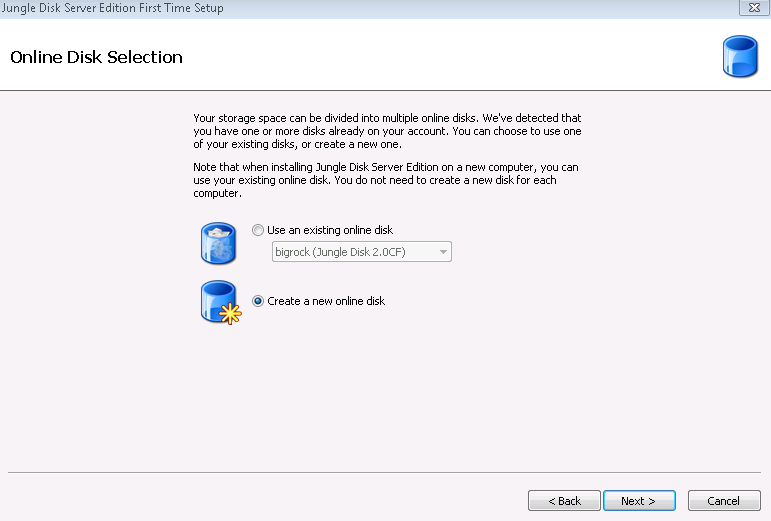 Choose between Standard Security, or High, which will encrypt your data whil it is stored on the Jungle Disk infrastructure. (We chose standard) 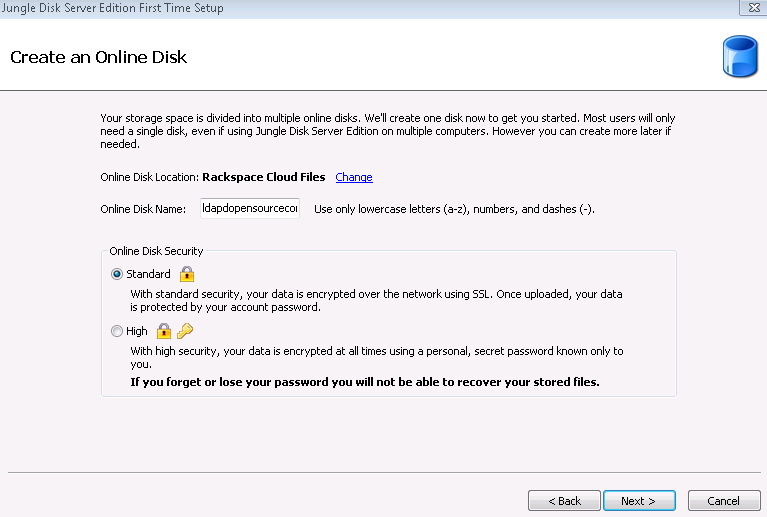 Select you backup schedule. We stayed with the default daily schedule. 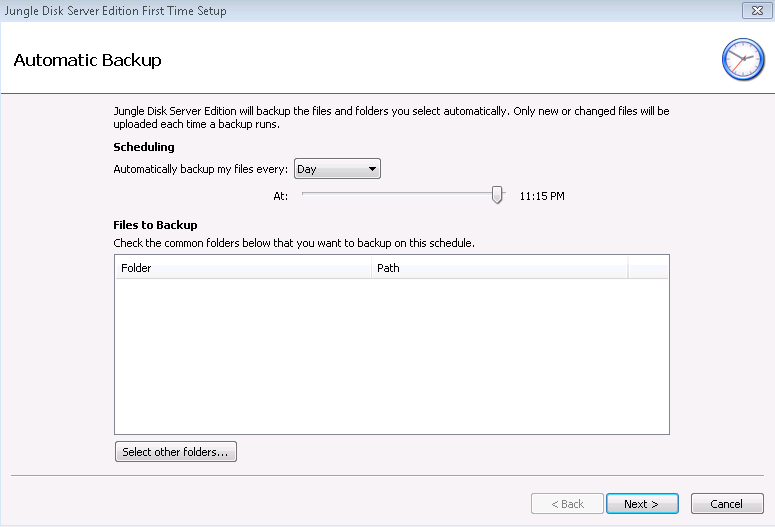 Next, select what files to backup on your linux server. 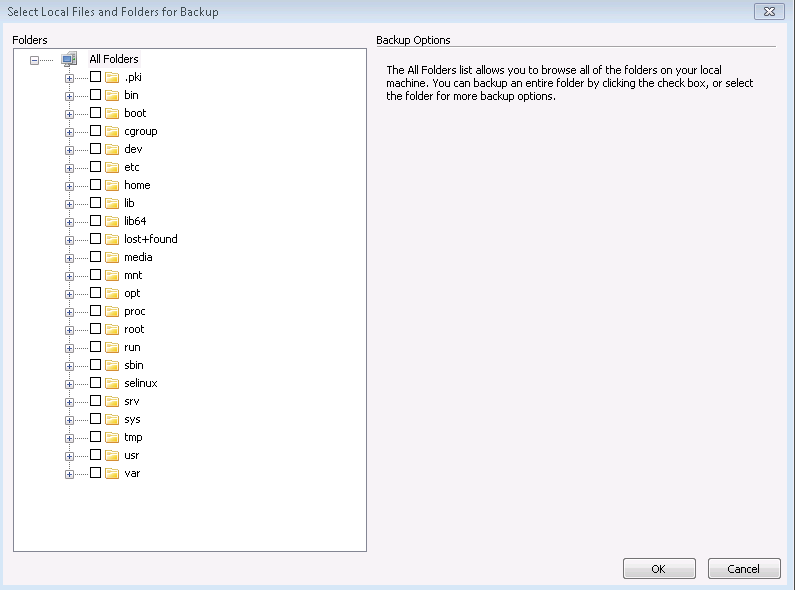 Hit ok, and next. You should be done! You can now try running a manual backup to get your files backed up right away, or wait for the scheduled backup to run.

We will need to create a new directory for our second tennant. The default configuration is a good place to start from, so copy over the default.xml file and the default directory to the domain name of your new company.

Now, change the domain name, group name, and include directory with vim dopensource.com.xml

By default, each user is set to use the default context. We will need to change this if we want each company to have a different context. You can either change this in each users include file, or remove this line from those files and set it in the global directory xml file.

To remove all of the user_context lines from the user’s include files, run this sed command.

Then add the user_context setting in the directory xml file with vim dopensource.com.xml

Now when a user registered to our system via dopensource.com, their calls will be processed in the context dopensource.com. We will need to create this context for this to work though.

Now that we have setup our Directory, it is time to create a seperate context for our new company. We will start from the defaul.xml file as a base.

We also want to adjust the include directory.

FreeSWITCH should now be configured to host a second company and seperate it into a new context. You can repeat this process for as many domain names as you like.

You will need to change your dns settings to make sure the domain name you use in your directory is actually routable to your FreeSWITCH server. Also, don’t forget to register to this domain name when setting up your phone.