This series of articles will give you the information you need to standup a cluster of Asterisk servers using Docker containers, which we categorize as media servers where traffic will be load balanced by Kamailio.

In this article we will configure the plumbing of the cluster and deploy a couple of Asterisk containers (media servers). At the end of this article you will understand how to setup a basic Docker cluster that can automatically discover and auto register Asterisk servers to the cluster.

Let’s start by setting up the main components of the cluster. We will use Consul, which was developed by HashiCorp to provide the plumping for our cluster. This plumbing includes Service Discovery, DNS, Event notification and other services that we may discuss later on in this series. The documentation for Consul can be found at <https://www.consul.io/docs/index.html>

The prerequisite is to have docker installed

We can start the cluster by running:

Now we need to have a mechanism to automatically register Asterisk servers with the cluster and specify the SIP ports that the server is listening on. For example, we might want to spin up 3 Asterisk servers to handle the load. We need to have a way to tell the cluster the IP address and the Asterisk SIP port number of these servers without having to manually configure the cluster. This is done using Registrator, which was developed by GliderLabs.

You can start Registrator by by running:

The above command will start the Registrator container and listen for Docker events using the Unix socket (/var/run/docker.sock). This port acts as a control port for Docker. We will dig deeper into this socket in upcoming articles. All we need to understand right now is that start/stop events is sent via this socket each time a Docker container is started or stopped. We use the volume option (-v) to make the socket available to the Registrator container on /tmp/docker.sock. The last parameter specifies the registry that events should be sent to. In our case, we are using consul as the registry, but Registrator is designed to use other registries. The ip of our registry is the exposed ip address of the Consul server that we started earlier in the article. Here a picture of what Consul looks like after starting the Registrator container

Now we need to registrator a coupe of media server, which can be done using:

The above commands will start two (2) Asterisk servers with a service name of “mediaserver”. In this example we had to specify the exposed port numbers, but this will typically be done randomly and automatically so that we don’t have to keep track of which port numbers are already in use versus what’s available. We will release our own asterisk server containers for these articles that will handle this for us – we will update the article once that is complete.

Here’s a picture of what Consul looks like now:

In Part II we will discuss how to deploy a SIP Proxy service ran by Kamailio that will automatically know how to route SIP traffic to Asterisk containers that are available on the cluster.

We have made a decision to jump head first into containers with a focus on providing Enterprise Grade Docker and Kubernetes Support.  It’s only right to convert our infrastructure into containers.  We are going to start with our bread and butter, which is our phone system.  Being a support company with a strong focus on helping companies deploy VoIP means that this is huge risk for us – we have to get this right or we will literally lose money.  But, if you never jump you will not soar.  In other words, if we are going to provide support for Docker, Kubernetes and in general Microservices we need to go through the process ourselves so that we can help others navigate the waters.

We currently use the FreePBX distribution as our PBX and Flowroute as our carrier (we love Flowroute by  the way).  We only use an handful of the options in FreePBX.  To be precise, we use:

If you think about it…each one of these features could become a container, but does that really make sense….not really sure yet.

We have decided to break this project into phases and we will make each new phase better by incorporating what we learned from the previous phases.

Phase I – Create a conference container and have all conference traffic be routed to 1 or more containers that just handles conferencing.  There are times when we had multiple conferences happening all at the same time, which causes performance issues.  We want a solution that would realize that the existing conference server has too many requests and it automatically spins up another conference server and start routing requests to the newly created instance.

We will also need a Web GUI for managing the conferences and the other features that we need.  FreePBX is not container aware, so we are toying with the idea of developing a simple Web GUI that knows how to deal with functionality being containerized.

Docker Tutorials, Kamailio
by nschoonover May 11, 2016

In this tutorial we will go over how to create a Dockerfile for Kamailio and build our own Kamailio image. If you want to learn more about Dockerfile’s you can read through our other post on creating a Dockerfile.

We need to configure kamctlrc to use SQLite and to not prompt us during the database creation.

Now that we have a finished Dockerfile, you can exit out of your editor, saving any changes. The file should look something like this.

Building and running the new image

Are you looking for the CentOS 7.x version?  It can be found here

You can hit yes to all the options. There is no root password as of yet, so the first question will be blank. Be sure to use a secure unique password for your root user.

Configure Kamailio to use MySQL

Enable the mysql and auth modules.

Add the following to the beginning of the kamailio.cfg after #!KAMAILIO

We also need to edit /etc/default/kamailio to notify Kamailio that is is configured and ready to go.

In this tutorial we will go over how to publish an image you have created to the public docker hub. You will need to create a docker hub account to continue.

Login to your Docker Hub account on your docker host.

Simply execute the following and input your credentials:

One of docker’s advantages is it’s git like work flow. If you are a git user, this process should look familiar. We will need to create a repository on the Docker Hub. This can be done by logging into the Docker Hub, hitting create repository, and filling out the necessary information. For simplicity, I named my repository the same as our image from the previous tutorial (nginx). You will need to change dopensource to whatever your account name is. 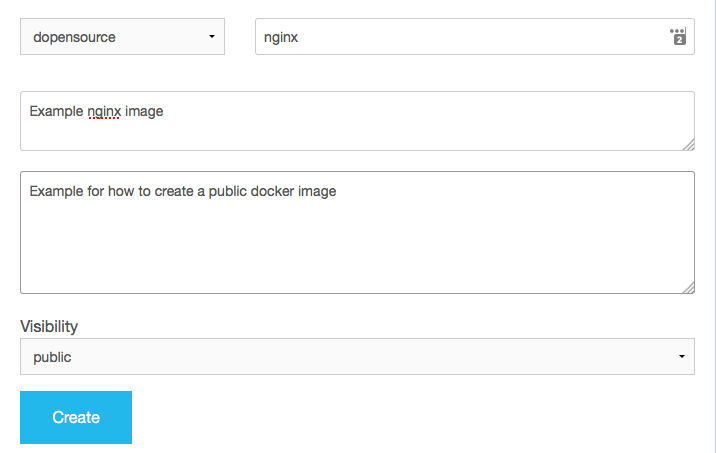 You will need an image on your system to push to the Docker Hub. If you followed our previous tutorials, you should have an nginx image built on CentOS 7.

The recommended way to create images for sharing is from a docker file. A docker file is essentially a script which can recreate the building of your image. We will go over how to create one for nginx on CentOS in this tutorial.

It is recommended that each docker file is contained in a separate directory. This will help keep everything organized and give you a place to store any extra files if needed.

In this tutorial we will be using the following instructions:

The RUN instruction will run a command in your image environment. By default, any arguments will be ran in shell. Each argument is technically passing the following command to the environment.

The ADD instruction copies files to the image’s file system. This is useful for adding configuration files, scripts, or any other files needed in your environment. We will create a sample html file to add to the nginx root directory.

The EXPOSE instruction tells docker which network ports the container will listen on. We are setting up an http server, so we will need to have the container listen on port 80/tcp.

Finally, we need to tell docker what command to run when the container is started up with the CMD instruction. The argument for this instruction will differ depending on what application you want your container to run. In this example, we will start nginx in non-daemon mode, so that when we attach to the running container, we will see the nginx console.

When you are finished, your docker file should look something like this.

Now that we have a docker file and any needed files in our directory, it is time to build the image. From within the docker file directory, execute the following:

Now that you have built your image, it is time to run the image as a new docker container. Remember, we will need to expose port 80 in our run command and specify which port on the host to bind to.